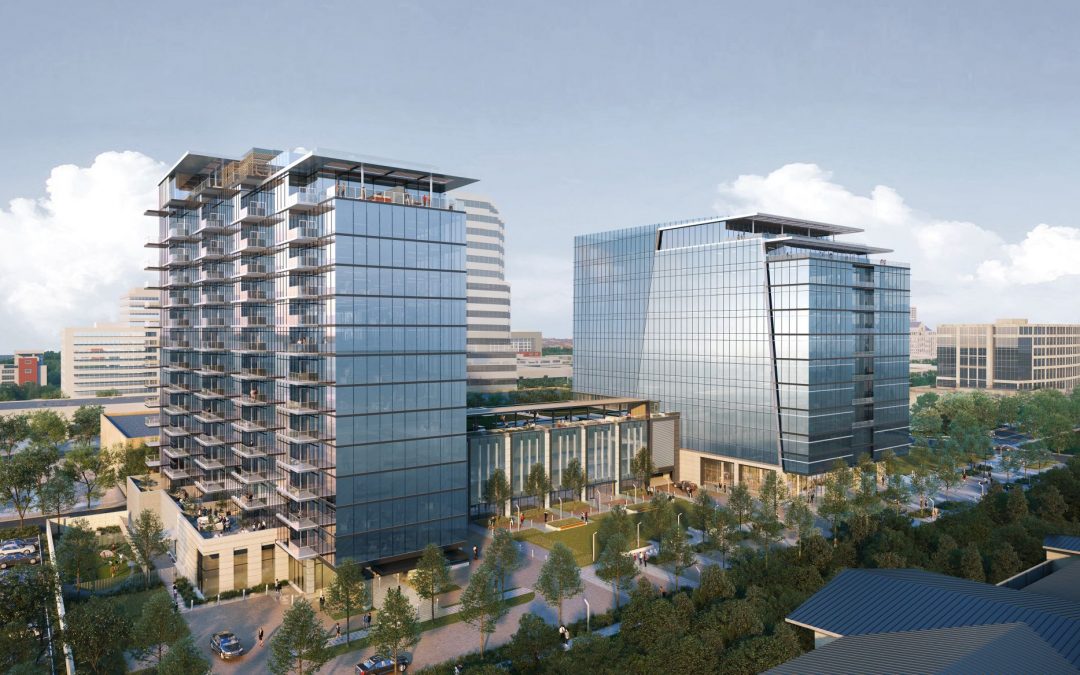 As Dallas emerged in fits and starts from COVID-19 shutdowns, workers broke ground on one of our city’s biggest, most-anticipated real estate ventures of the post-pandemic era — a glassy, tree-lined, $75 million double-highrise mixed-use development at 8111 Douglas.

The Lincoln Property Company project sits on land owned by Saint Michael and All Angels Episcopal Church, and it is several bumpy years in the making. The rest should be smooth sailing, the developers report.

Construction began last May and is slated to wrap Feb. 28, 2023, according to architects HKS.

This thing has come a long way since 2016, when erstwhile Dallas Morning News columnist and Preston Hollow resident Robert Wilonsky broke news that Saint Michael planned to build an office tower and parking garage on a piece of vacant land adjacent to Preston Center.

He wrote that the announcement was “as close to fightin’ words as you can get in Preston Hollow.”

Wilonsky explained that despite Preston Center’s fiscal potential, his neighbors would prefer to see “little, no or very, very slow change.”

The previous year, a Preston Hollow Task Force had formed to study problems and the opportunities in the neighborhood and to develop a “consensus vision that could provide a road map for future development initiatives,” according to a notice from former Council District 13 representative Jennifer Staubach Gates. The task force quickly concluded Preston Center had “more potential for economic development than (had) been realized.”

Yet task force members voiced concern when they learned of the 8111 Douglas plans.

For one thing, as Gates noted, “area residents have opposed most redevelopment proposals because of concerns over traffic congestion and commercial encroachment on their neighborhoods.”

“When a project of this magnitude has been worked on the whole time the task force has been in existence and no one told us about it, it makes me wonder if at the end of the day we’ll have a meaningful outcome,” Miller told The News in 2016.

The church and land developers would need City Council support for rezoning the four or so acres before the project could proceed, so they would ultimately work within guidelines set forth by the force.

Saint Michael, which has been at 8011 Douglas since 1948, began shopping for a land developer after church officials learned that their tenant Episcopal School of Dallas would be relocating, which would mean losing monthly income generated by that rent.

The church’s Campus Planning Committee in 2015 “felt obligated to consider the long-term stewardship of the church’s property and the excess land to the north of the main campus,” according to a December 2015 Saint Michael newsletter. It indicated that the property was acquired in two parcels over the past decade for approximately $12 million.

An office building would be consistent with the church’s “strategic needs” for covered parking and “an air-conditioned sky bridge,” according to the newsletter. And it would generate funds that would further its mission to “be disciples of Christ.”

The church teamed up with developer Lincoln Property in 2018.

“It has taken a significant commitment of time and money to accommodate the task force recommendations,” Lincoln Property Executive Vice President John Walter said in a statement that year, “but we believe the new result will be worth it.”

The City of Dallas approved rezoning based on task-force-sanctioned plans in February 2020.

Today at 8111 Douglas, the aroma of asphalt fills the air as work on a parking lot gets underway.

According to Saint Michael’s blog, phase two of the project, expected to last about six weeks, began Nov. 1. Landscapers planted a row of young live oak trees in late October. The church reported the big freeze of 2021 devastated much of the property’s greenery, which they are replenishing.

Each of two towers runs approximately 225,000 square feet, capped at a predefined residential proximity slope, “to protect the sight line of the nearby neighborhood,” according to a FAQ sheet supplied by Lincoln Property.

Lincoln Property will relocate its head- quarters to one of the 12-story towers when complete. The corporation, moving from McKinney Avenue near Klyde Warren Park, will occupy 59,000 square feet. Another 26,500 square feet of one 12-story building will house Sewell Automotive.

Almost 7,000 square feet of the ground floor will go to a to-be-determined restaurant or restaurants including a patio and an acre or so of green space. The church reports that some recreational space will be dedicated to its farmers market. The project includes 130 “ultra luxury” apartment units zoned to Highland Park ISD.

The Advocate requested interviews with both LPC and Saint Michael. The church referred us to LPC, who provided a FAQ sheet.

“The development is projected to bring hundreds of millions worth of new value to the City of Dallas, Dallas County and Highland Park ISD tax rolls,” according to the sheet, which is available on the Lincoln Property website.

Saint Michael rector Christopher D. Girata has said the 8111 Douglas project will allow the church to be “future focused” and that revenue generated from this lease will help the church support the surrounding community.

“This initiative will activate and energize our parish in new ways,” he says.

We use cookies to ensure that we give you the best experience on our website. If you continue to use this site we will assume that you are happy with it.OkPrivacy policy