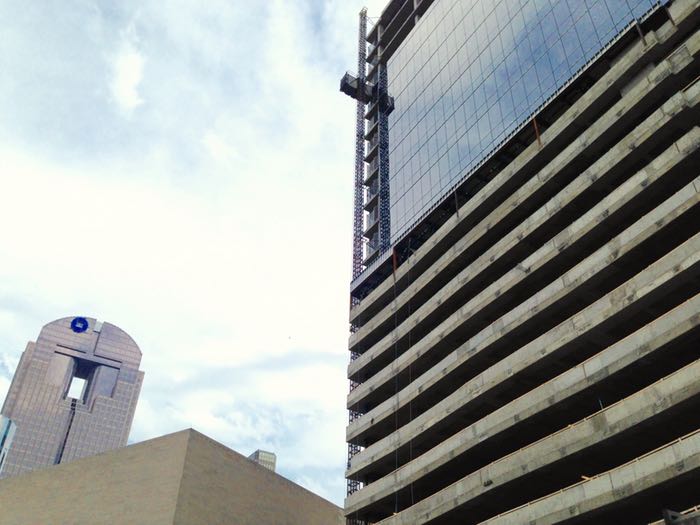 Downtown Dallas’ Next Tower is Heading Toward Opening

Downtown Dallas’ tallest office tower in more than a decade is headed toward a finish.

The 25-story 1900 Pearl building is being constructed at the corner of Pearl Street and Woodall Rodgers Freeway across from Klyde Warren Park.

Developer Lincoln Property Co. and its partner Goldman Sachs are celebrating the topping out of the 260,000-square-foot high-rise, which is being built next door to the Meyerson Symphony Center in downtown’s Arts District.

“We are still on schedule to wrap up construction in December,” said Lincoln Property’s Worthey Wiles. “Baker McKenzie will start moving in in January.”

Downtown law firm Baker McKenzie has rented 50,000 square feet located on more than two floors of 1900 Pearl.  They are the first major tenant signed up for the tower.

“I think the building will lease up when people can get in and see it,” Wiles said.

Designed by Dallas architect HKS, the office space sits on top of 13 floors of parking.

Wiles said that the developer is negotiating with a couple of restaurant tenants for space on the first floor.  The first floor of offices will start on level 14 with a lobby area, tenant lounge, and outdoor deck.  That level includes a fitness center and conference room, too.  There’s even a small sports facility.  “We think the basketball court will be a hit,” Wiles said.

General contractor Austin Commercial has started putting the glass on the office floors of 1900 Pearl. But so far the lower garage floors are wide open.  “People don’t understand why we don’t cover it up,” Wiles said. “We did the upper floors first so we could turn on the air-conditioning.”