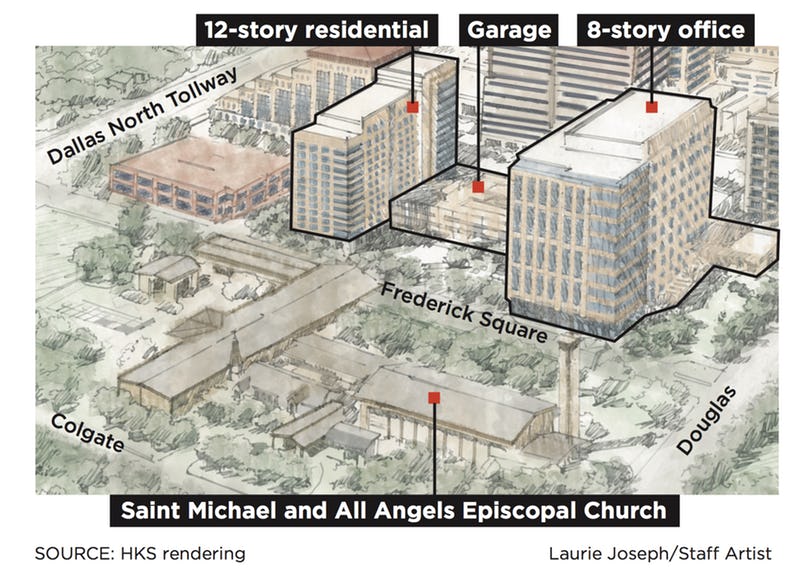 Saint Michael and All Angels Episcopal Church has owned the almost 4-acre block at Douglas Avenue and Frederick Square for more than a decade.

An apartment complex once sat on the land located just east of the Dallas North Tollway.

Now the church — which has been in Preston Center since 1948 — is teaming up with Dallas developer Lincoln Property Co. to build residential and commercial buildings as part of an expansion of the church’s campus.

A large underground parking garage would meet the needs of both Saint Michael and the new development.

The church has just submitted plans for the project to the city, and is requesting approvals for the development.

Church representatives say they aren’t seeking additional height or density with the construction.

Saint Michael officials and the developers say they have worked within the latest development task force recommendations for the district. An earlier development plan for the property was tabled in 2015.

“Our new plan starts to bring to life the vision that our congregation has had for what our campus can be,” the Rev. Dr. Chris Girata, rector of Saint Michael and All Angels, said in a statement. “Just like the task force, our parishioners want wide sidewalks, plazas and green spaces.

“Not only was it the right thing to do to wait on the task force recommendations, but we believe that we now have a far better plan than we had in 2015 — better for us and better for the neighbors.”

A 12-story residential building would be constructed on the west side of the property. Office towers which adjoin the church development site are 19 and 20 floors. And a residential condominium next door is 10 stories.

“Our goal is to design and build a ‘best in class’ development designed to meet both the guidelines of the Preston Center task force and the needs of Saint Michael and All Angels and the surrounding neighborhood,” John Walter, Lincoln Property executive vice president, said in a statement. “It has taken a significant commitment of time and money to accommodate the task force recommendations, but we believe the new result will be worth it.”

Because of concerns about traffic and building heights, development in the Preston Center district has been contentious for years. Neighborhood groups have fought against several proposed high-rise developments in the area around the intersection of Preston Road and Northwest Highway.

A task force of stakeholders, residents and city officials have been laboring for more than two years on new development guidelines for the area.

“Based on my review of the preliminary plans for the proposed Saint Michael mixed-use development, I believe this project could be a role model for future developments in the Preston Center area,” Dallas businessman Pete Kline, one of the members of the task force, said. “They have gone to great lengths to address the concerns and the priorities of the area plan.”

Dallas city council member Jennifer Staubach Gates said she hasn’t seen the designs for the Saint Michael project but expects it to meet the vision of the new development plan for the area.

“I’ve asked that the church work with all the stakeholders around them including the neighborhood,” Gates said.